Whether or not you believe games (digital or analog) are a form of art, it is undeniable that there is a huge artistic culture around and in the gaming world.

Without jumping into the games as art debate, I would like to state that I do believe many games are art and many games would not be what they are today without artistic principles and an artistic vision. My time as an art intern at Tiltfactor has only reaffirmed this opinion.

There are two games whose art I love more than any other. The first, Dungeons and Dragons, I have never played, but I grew up with friends who did. I watched some of their gameplay but, more than that, I leapt every time I had the chance to get my hands on one of the guidebooks. I spent hours pouring over the Monster Manual in particular. Though I have never played D&D, I grew up in love with its art.

In the gaming manuals, the art is often half-sketched, half-colored pictures of creatures and characters, sometimes dark and foreboding and sometimes humorous. Despite the fantastical subject matter, the art for D&D is based in realism and there is a technical excellence in the shading and the anatomy of the creatures (as opposed to the more cartoon-ish art of something like Pokèmon). The art helps create a sense of the D&D world that makes the game feel more real and alive. In elementary and middle school my friends would ask me to draw their D&D characters for them, and this was my first adventure in game art. The D&D drawings eventually led some friends and I to create our first game. A game about dragon riders based around a dictionary of dragons I illustrated and my friends colored. A love of game art had been born.

An example of Dungeons and Dragons art (this is not mine, it is official D&D art):

I love the above piece because the sense of power and size you get of the dragon, he looks like an intimidating and prideful creature. I also appreciate how the definition of scales and muscles in the drawing help you to imagine the dragon as a real, living breathing creature.

There is a plethora of beautiful and intriguing artwork that goes along with Dungeons and Dragons, and yet, you don’t need any of it to actually play the game. In that way the art can stand alone from the game, solely as art, and it is still worth seeing.

My other favorite game art – is the world encompassed by the Elder Scrolls game, Skyrim. Skyrim, released a year ago, is one of the most expansive and intricate gaming worlds out there. It’s 3D environment has an excellent attention to detail and a new level of realism for the digital gaming world. And even more than the 3D environment in the game, the concept art (and some of the fan art) are absolutely incredible as well.

Skyrim does a wonderful job of combining character and creature art with environment art and architecture to create an enchanting places that give you a sense of mystery and adventure. The art is well thought out and intentioned to draw you in to the world of Skyrim. 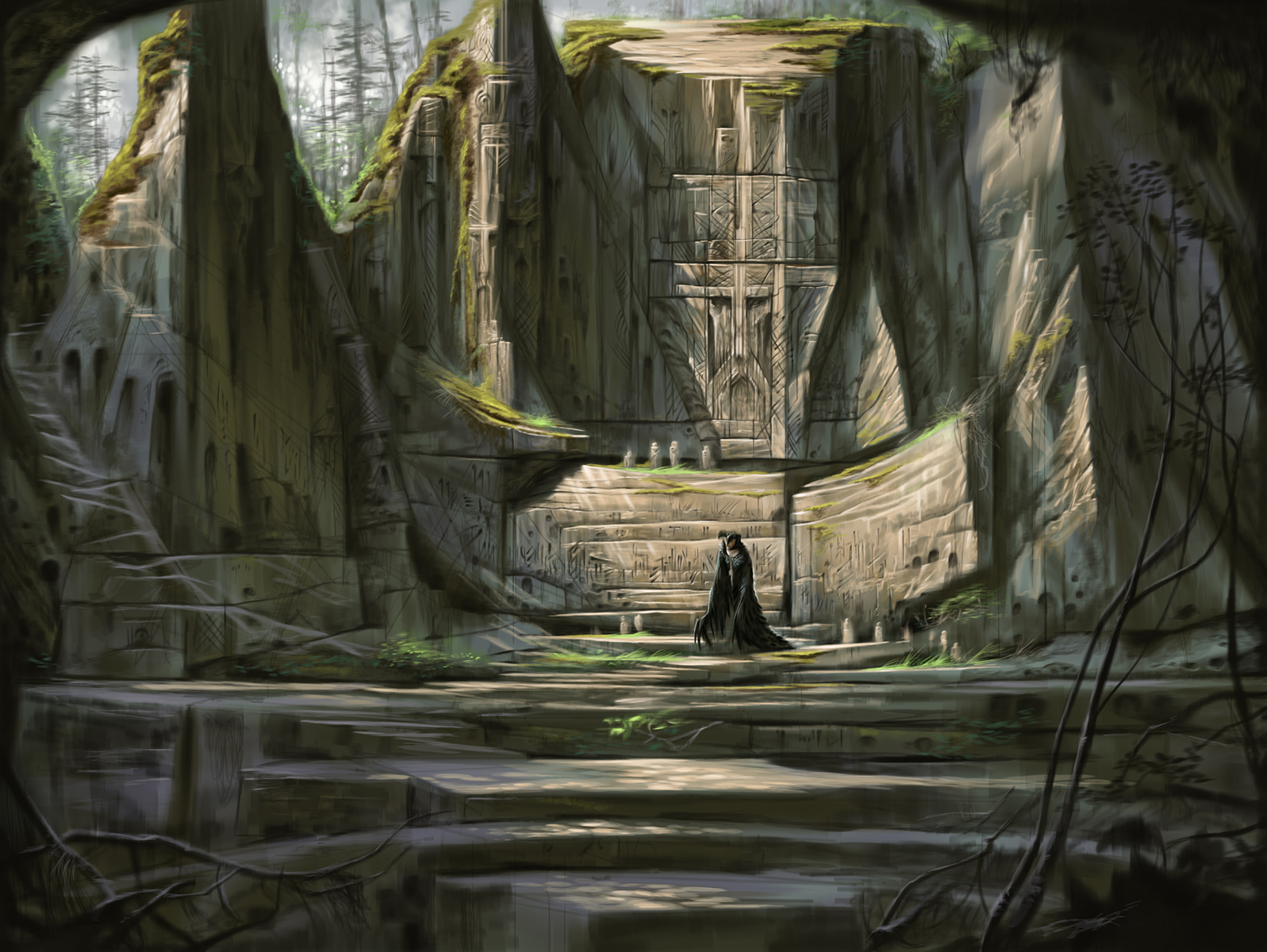 For anyone who has played Skyrim, they’ll recognize the ‘Word Wall’ in this piece. Word walls are found throughout the game. I love that a 2D piece of art like the example above can be transformed into a 3D digital world that you can explore and interact with through a game.

Even though the debate of games as art rages on, from concept art to production art to fan-art, the gaming world is inextricably linked to the art world.

One day, I hope to be the artist behind beautiful ruins and imposing dragons, but until then, I am excited to interning at Tiltfactor and getting to do art for the games here. For now, I’m not drawing dragons and monsters (though there was something about a Zombie a few weeks ago…) I am drawing items and game elements.

Below is an example of some sketches for a handwashing game (a card game) Tiltfactor is currently working on. Like the art for D&D and Skyrim, with drawings like the ones below for the handwashing I’m trying to tap into a sense of realism to invoke a reaction from the player. In this case, the sketches are of gross things, that when you imagine touching, make you want to wash your hands immediately! At the same time, I’m trying to balance the gross realism with a sense of comedy so that the drawings are enjoyable. If someone looks at the ‘Pee-stained’ tighty-whities card, I want them to go “Ewwww” and giggle afterwards (it is a game for children after all). And with something like the dead squirrel, you can see below I went through a number of iterations trying to find the right balance for the feeling of the drawing.