“Please be warned that your voice, your fingerprints, your biometrics are being scanned. You are now part of the artwork. If you don’t want that don’t come see the show!”

Imagine entering a dark gallery space at the Laboratorio Arte Alameda, in Mexico City, Mexico and experiencing a multi-dimensional sound scape. The lights behind you cast a shadow of your body against a brightly lit wall. Your shadow joins dozens of others in a space where your every movement is monitored by scanners. Behind the scenes, a vast array of radios, transmitters, antennas, amplifiers, mixers, and an assortment of electronic devices input your data and output it as a “mash up” broadcast. The effect is similar to what happens when you push the scan button on your car stereo. A steady stream of snippets consisting of traffic reports, pop music, video, advertisements, and news tickles your ears. 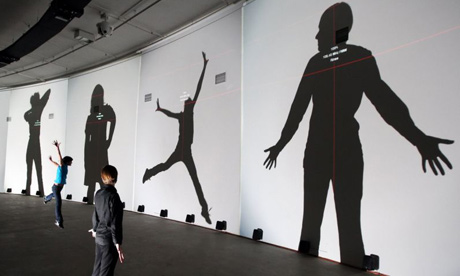 This is the work of Rafael Lozano-Hemmer who describes himself as an “electronic artist that develops interactive installations at the intersection of architecture and performance art.” The piece is titled, “Frequency and Volume,” for it’s auditory nature. Lozano-Hemmer created it, in 2003 around the time that the Mexican Government was wielding their power over indigenous people in the states of Chiapas and Guerrero by shutting down their short-wave radio stations.

While his installation demonstrates what it feels like to be tracked and targeted using monitoring equipment, I feel that it doesn’t directly confront the issue of free speech by posing the question, “Who really controls the airwaves? Instead, Lozano-Hemmer installation keeps visitors entertained, enthralled by its playful interface. Victor I. Stoichita, author of A Short History of the Shadow, describes a similar scene in Plato’s story about the origin of knowledge where “prisoners were incapable of gazing directly into the light of knowledge. They had their backs to this bright light and saw only the shadows cast on the cave walls. Plato’s point was that they saw only the shadow of reality, not reality itself.” 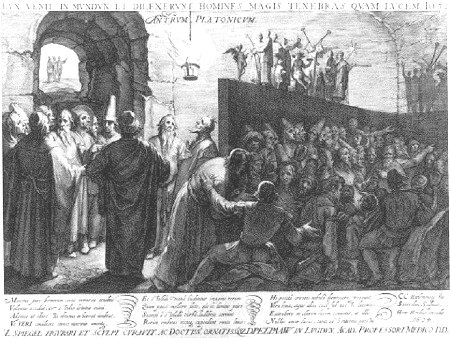 The use of a shadow metaphor appears in many of Lozano-Hemmer’s installations. But in “Frequency and Volume” it is the primary visual focus. According to Jungian theory, “The shadow contains the unconscious aspects of our personality that have been lost, rejected or never integrated.” Perhaps, Lozano-Hemmer’s shadow component through its simplicity, allows us to tap into our subconscious. We can focus on the auditory or “voice within” that speaks to us rather than ignoring it. In addition, “Jung viewed shadow integration as a moral as well as a psychological process which, he believed, holds the most hope for us as individuals and for society as a whole.”

Lozano-Hemmer’s “Frequency and Volume” has an evergreen quality that stays fresh. His work premiered in 2003 but has since been shown in a number of group and solo exhibitions. Its bears a universal message that crosses borders and cultures. The same message that gets us to think about free speech when it comes to the plight of Mexico’s indigenous can be felt here in the U.S. where the FCC (Federal Communications Commission) since 1981 under the Ronald Reagan administration has been cracking down on non-profit organizations such as the Radio Pacifica. “Frequency and Volume” reminds us that we are in control of our airwaves because we own them as citizens. We can touch them, manipulate them in real-time and as a group shape them into a picture that reflects back on us. Perhaps the challenge that visitors have when they leave the exhibit is applying what they’ve leaned to the so-called “real-world”.